Thirty-five years ago tonight, I had arrived in Newcastle, roughly a 45 minute journey from my home town, and was about to attend my first rock concert. My two friends and I arrived about an hour before the concert as I recall, and decamped to the City Tavern, a pub along the road from the venue.

I sipped my beer slightly apprehensively with my two chums, in a dark corner. I think this may actually have been the first time I’d drunk alcohol in a pub, and I was a bit nervous about being caught, a few weeks before my 17th birthday. It wouldn’t be legal for me to drink in a pub for another year. But soon enough we wandered along to the venue, through the main doors, and into the foyer. People were milling around there, queuing for badges and programmes – I still have mine, of course – and it all seemed very exciting.

Then when we entered through the big door into the hall, I could barely believe my eyes. The stage was so close .. it was all a lot smaller than I’d expected. I’d somehow formed an impression of concert venues being huge, cavernous places. Which they usually are, now, of course. But this seemed smaller than a cinema. It was in fact a theatre venue with a capacity of about 2,100 seats.

I took my seat and read my concert programme. You’ve probably seen the online version if you’re a Rush fan. It’s the one in which Sounds magazine’s Geoff Barton writes an entertaining little story about the Priests of the Temples of Syrinx, managing to work the band themselves into the plot.

But I kept glancing up at the stage. I couldn’t believe my heroes were going to be right there .. here in the same room as me! They must already be in the building somewhere! It seemed unreal. Neil’s drums were already on the stage, with a little Starman logo on each of those two big ones that sit on the floor!

I’d managed to cultivate a quite unhealthy obsession with Rush by this time. I had nearly worn out my illegal cassette copy of the band’s live album, All The World’s A Stage. I had closed my eyes and immersed myself into that concert in Toronto, recorded for posterity exactly one year earlier, dozens of times.

The support band – Stray – were really good. I was impressed by the light show. And they were LOUD! A lot louder than my parents’ HiFi. Wow!

By the time the lights went down, I was almost sick with excitement. My heart was pounding, and the crowd was roaring. 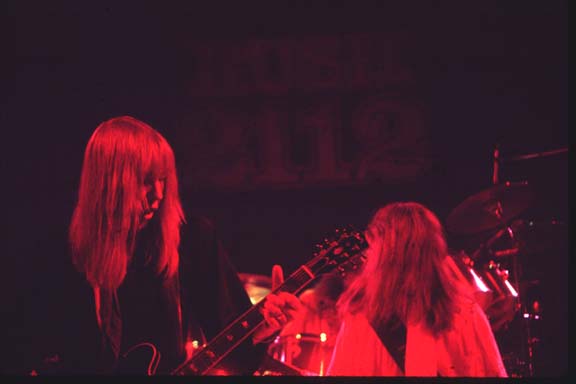 Then suddenly, my life changed, forever. The stage burst into light, and Alex was there, leaning over a Gibson guitar, his blond locks tumbling forward, cranking out Bastille Day, louder than I’d ever imagined it. It is a moment that is burned into my mental retina for all time. The crowd was going wild around me; everyone was on their feet. Geddy was strutting along the front of the stage, grinning widely, wearing what appeared to be a bed sheet as a cape, coaxing bottom-end loudness from his Rickenbacker bass. And Neil was hitting those drums hard! And already twirling his sticks, something I hadn’t expected at all.

My jaw dropped. It was sensory overload. I probably went into shock, slightly.

The show seemed to pass so quickly. A rip-roaring By-Tor And The Snow Dog gave way to The Necromancer, a tune I confess I’d never heard but was very intrigued by. And “side one from our latest studio album” – 2112, of course – was astonishing; emotional, intense and powerful. There was a new song called Xanadu. With double-neck guitars! Wow.

It was over all too soon, but even after a rowdy and rousing second encore, What You’re Doing, the crowd hadn’t had enough. We shouted, stomped and begged very loudly for what seemed like about half an hour, to be rewarded by Alex walking back on stage, grinning from ear to ear and looking incredulous at the reception he and the band had received. The other two joined him and after a very loud, highly energetic and frankly joyous performance of Best I Can, it really was all over this time.

As we spilled out of the City Hall into the cool of a Newcastle summer evening, my ears were ringing and I felt oddly intoxicated and elated.

Four weeks later I hand over a tenner or so at Boots, and become the proud owner of Fly By Night, Caress Of Steel and 2112, the three most recent Rush albums (and there are only four, in July 1977). And if you’d told me that I’d be looking forward to getting my hands on a new Rush album in 35 years’ time, I think I’d have been quite surprised.

Here’s an odd thought that occurred to me earlier today. I can remember the events of that night 35 years ago quite clearly. 35 years before that, World War Two was just getting into its stride.