Late one evening in November 1979, my roommate Chris and I returned from the pub to find several of the other students with whom we shared a house gathered around the communal television, watching a man in a spacesuit wandering across what looked (a bit) like a lunar landscape.

“Giant steps are what you take!” exclaimed one of my fellow residents by way of a reply of sorts, cleverly referencing the Police single Walking On The Moon which had been released earlier that month.

It was in fact Robert Altman’s 1968 film, Countdown.

I only caught the last ten minutes of the film, unfortunately. But I promised myself I’d watch the whole thing one day and last night, I did.

The events of the years which followed it have made something of a mockery of this film, which concerns a secret backup project to Apollo called Pilgrim, hurriedly put into operation when it’s discovered that the Russians are planning to land a man on the Moon before NASA. One of the Apollo 3 astronauts, a geologist called Lee Stegler (James Caan), is given three weeks to prepare to go to the Moon on the Pilgrim spacecraft, where he must locate a special shelter due to land there a few days before he does. Once he does get there he is to stay put, receiving supplies from Earth every couple of months until an Apollo mission can be ready to come and bring him home.

Since the Moon shelter completes its mission to the Moon either automatically or under remote control from Houston, it’s unclear why they couldn’t just have strapped him into it before take off, to save sending a second spacecraft. He could have sat reading magazines and sucking boiled sweets while the computers and boffins on the ground did all the work.

The first part of the film – dealing with Mrs Stegler’s dread and anxiety, internal politics and infighting at NASA, will he be ready in time, will the Soviets get there first and all that – is actually a bit dull, predictable and overdone. I understand that the British release of this pic was 30 minutes shorter (I watched the original 101 minute version) and I doubt that the plot suffered in the slightest at the hands of the editor’s knife.

Nonetheless I quite enjoyed the whole thing, especially after our hero blasts off for the Moon.

Of course it’s impossible to watch this film without experiencing it as taking place in a sort of bizarre alternative universe, and I don’t just mean the ’60s. Altman’s depiction of Man’s first steps on the Moon is utterly different from the actual event that took place about a year after the film was released, but for me, that only served to make this part of the film more unsettling and compelling.

Stegler just climbs down from the hatch in the subdued lunar gloom and sets off on foot to look for the shelter. No TV camera, no speech, no Buzz Aldrin, no radio contact with Earth. Despite clear shadows on the surface it’s somehow almost dark, adding to the general feeling of isolation and eeriness. He doesn’t actually know where the shelter is apart from its rough location. He lied to Mission Control when they asked him to confirm that he’d sighted it from lunar orbit.

While hiking across the surface of the Moon, Stegler finds that the Soviets did get to the Moon first, when he comes across the wreckage of a Russian Moon lander and the bodies of three cosmonauts, wearing helmets emblazoned with ‘CCCP’. This made me laugh because the surface area of the Moon is about twice that of the continent of North America, and even allowing for the notion that the Russians were aiming for the same general area it seems fantastically improbable to me that he’d simply happen upon them.

Does he find the shelter? It’s quite a watchable film, so I won’t spoil the ending. You can always Google it.

By the way, giant steps are not what you take when Walking On The Moon in this film.

A couple of months ago I was disappointed to find that a flapjack that I’d left in a frame pack on my bike in the garage had been part-eaten. I was pretty sure it was untouched when I left it there, and I don’t tend to bite through the wrapper when I eat them myself – so the only reasonable explanation seemed to be that it had been “mouse-masticated”, if I may employ a turn of phrase made popular by The Rutles. Or “rodently-chewed”, if you prefer.

I invested in one of these: 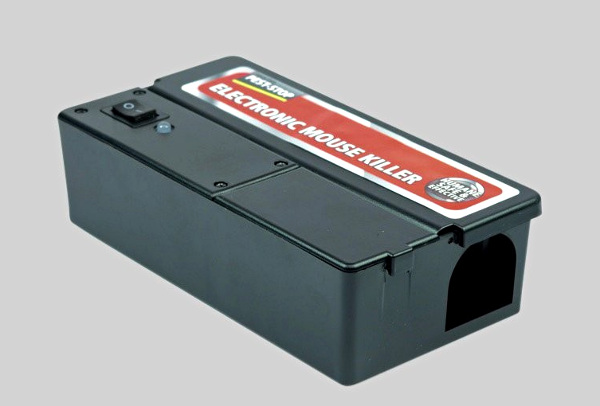 I loaded it with four AA batteries, baited it with a small piece of the same flapjack product, left it on the garage floor and switched it on. Sure enough when I returned to it the next day, the LED light was flashing to indicate that it had claimed a victim. The tail sticking out of the little door was a bit of a giveaway as well, to be fair.

I carefully disposed of the electrocuted rodent (a field mouse, I believe) and naively assumed I’d solved the rodent problem in my garage until earlier this month, when I found a pile of what looked like green plastic shavings on a shelf in there. I later realised that an attempt had been made to gain access to a bottle of Lucozade Sport on the same shelf, by nibbling the plastic cap.

I deployed the electronic trap again but also laid out two conventional traps on the floor, all baited with the same irresistible flapjack material. The next morning I was slightly alarmed to find that all three traps had done their deadly business. I had a trio of dead mice to dispose of.

Clearly the electronic trap works very well, but as you can see from the following photograph, which depicts the scene on my garage floor exactly as I found it – the rather less sophisticated mechanical traps seem to be just as quick and effective. 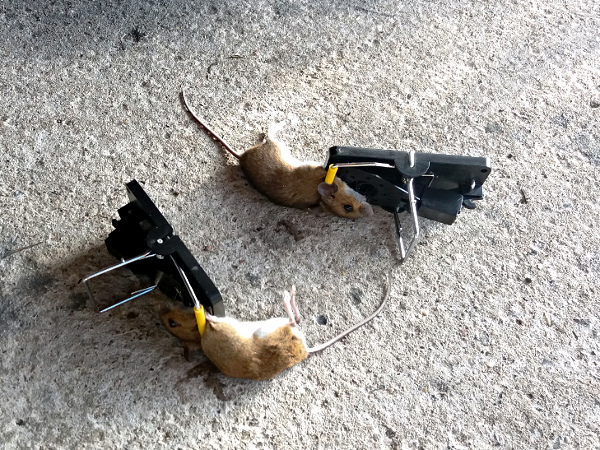 I do recommend these. They’re very sensitive and seem to dispatch their victims quite quickly – and the right-angled sprung bar means that you don’t have to touch the dead mice when you bin them. The bait goes into a sort of recessed cup that forces the mouse to activate a trigger flap surrounding it when they try to get it.

I was encouraged to see that both traps had whacked the mice right across the back of the neck. It must have been pretty quick. Assuming they’re consistently as effective as this I can’t see the point of buying an electronic one, really.

I’ve re-armed the traps and left them ready to do their lethal work for a few days now, but they haven’t done so. It looks like I got them all.

When I lived in a flat in London in the ’90s I had to deal with a mouse problem, and I bought a humane, non-lethal trap. I entered my kitchen late one evening to find that it had been “sprung” – its little door had snapped shut, which I assumed meant that I’d caught a mouse. I drove the trap to a wooded area a few miles away but when I came to release my little visitor, I found that the trap was empty. At one time I never would have used a lethal trap but now it just seems to me to be the easiest solution for everyone concerned, probably including the mice.