I first saw Motorhead in January 1978 at a club in Middlesbrough called the Town Hall Crypt – a basement under the Town Hall. I’d gone with two friends from school. We missed the last bus, and by the time my Dad came to pick us up, we’d already walked half way back to Hartlepool. It was their first album tour. They were extremely loud. 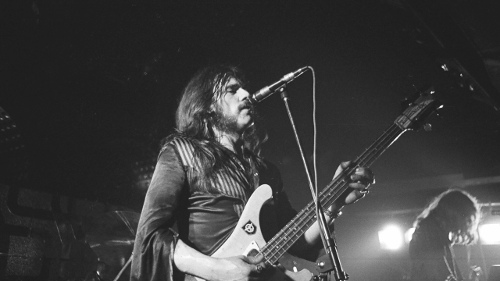 Their next two albums propelled them into the big time and I don’t think they played Middlesbrough again, but I saw them whenever they turned up in Newcastle over the next few years. I was there for the Overkill tour and the Bomber tour. In 1980 I went to the ‘Brain Damage Party’ event at Stafford Bingley Hall, a great big shed where I’d seen Rush twice the previous year. Motorhead were the headliners, but Saxon, White Spirit, Vardis and a number of other bands from the short-lived New Wave of British Heavy Metal were also on the bill.

A few months later I saw them on the Ace Of Spades tour at the Mayfair club in Newcastle, and that was my last Motorhead gig. I tuned out after that, though I’ve downloaded some of their later albums in the last few years.

I met the band backstage on the Overkill tour – Lemmy,  Philthy and Eddie were signing autographs for a few fans after the gig in their dressing room at Newcastle City Hall. Lemmy drew a hat on the photo of himself in my tour book before signing it.

Lemmy’s lifestyle was by all accounts rather like his music – completely unpretentious, utterly uncompromising and arguably a bit excessive. Born to Lose, Lived to Win. We shall not see his like again. Perhaps if he’d indulged a bit less in the typical rock’n’roll excesses he might have had a few more than his three-score-and-ten. But that’s the way he liked it, baby. He didn’t want to live forever.