Not long after I developed my current passion for cycling, at the beginning of 2015, I set myself a task of cycling to each of Leicestershire’s neighbouring counties and back from my home in North-West Leicestershire. There are seven. Four of them are rather easy, involving there-and-back rides of no more than 25 miles or so. Three of them – Rutland, Lincolnshire and Northamptonshire – need 60-odd mile trips to complete. But I’d got the set by the end of the summer that year, so I decided to see how many of the other counties I could conquer with a cycling return trip.

I’d had a plan to ride to Yorkshire and back for a while, and when the weather forecast seemed favourable, I booked a day off work toward the end of August to execute it. But while poring over Google Maps the night before I set off, on a whim, I decided to try for Norfolk and back instead – a somewhat longer route, but I hoped that the endearing flatness of The Fens would make up for it.

It was still dark when I set off, at about 05:40. And cold. I’d resolved to man up and make do with two layers, to avoid carrying an outer layer in my backpack that I wouldn’t use for 90% of the ride. But I was otherwise well prepared – I had a spare tube, a pump that I’d tested properly this time, a useful tool set with a chain splitter on it and even a spare gear cable. I’d uploaded the route to my Garmin Etrex, a GPS navigation device mounted to my handlebars to use in “track” mode, ie follow it as a purple line on the map rather than following turn-by-turn directions. The route to Norfolk that I’d chosen wasn’t that complicated anyway, and the first 30 miles, to Melton Mowbray, were already very familiar.

My bike computer has a thermometer built in, and I was pleased to see the temperature climbing slowly, starting at 10° C when I set off. By the time it hit 14°, over the Nottinghamshire border, I was perfectly comfortable. I pushed on through pleasant B roads through Nottinghamshire and into Lincolnshire, where I hit a delightful stretch of roads winding through sleepy villages. I didn’t see another road user for miles. Not long after that I entered the reclaimed marshland of The Fens, 30 miles out from the target. I knew I wouldn’t encounter a hill for the next 60 miles of cycling – as you can see from the gradient profile on Strava:

For some reason when I planned the route, I’d opted for a left turn to the A17 along a road called “Stockwell Gate”. This turned out to be a mistake; it was a narrow and badly maintained two-mile one lane track with passing places, and I didn’t really enjoy rattling my favourite road bike along there. On the way back I avoided it by bypassing it on the A151, which is what I should have done on the way out as well. I normally plan these long rides weeks or months in advance and would normally have ironed out that wrinkle by careful reference to Google Maps and Street View. However, since I’d only had the idea to do this one at about 10pm the previous night, I hadn’t put nearly so much preparation into to the route.

But after a not-really enjoyable, busy but necessary stretch of the A17 I crossed the River Nene over Sutton Bridge, and a couple of miles later I was in Norfolk. There’s no “welcome to Norfolk” sign unfortunately, so I snapped pic of a sign at a place called Walpole Cross Keys, just over the border. Then I turned back. I stopped at a McDonalds near Spalding about thirty miles later. I used my new ultra-lightweight bike lock to secure the bike and went in and ordered some coffee, fries and a beanburger. 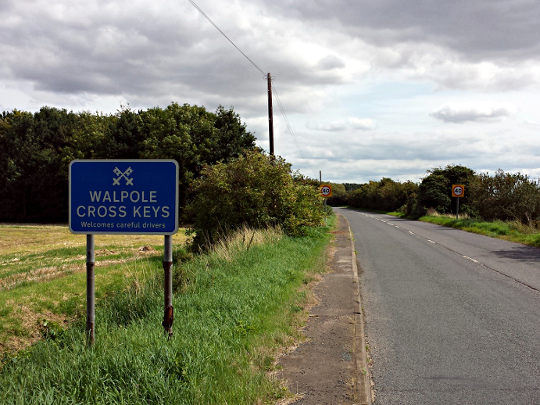 The route passes under the A1 near South Witham and I was dismayed to see that the road had been closed there on the way back. The bridge supporting the A1, just up ahead, was decked in scaffolding. More ominously, a pair of barriers, not present a few hours earlier when I’d passed that way, were stretched across the road on both sides of the bridge. The detour sign directed traffic directly up onto the A1, and judging by Google Maps would have added at least four miles to my journey, which I certainly felt I could do without. More importantly: as Mike from The Young Ones once memorably pointed out, suicide may be a great hobby – but I wouldn’t do it for a living. I was absolutely, emphatically not going to go cycling on the A1.

Civil disobedience seemed to be the only answer. The road under the bridge looked safe enough and it seemed unlikely that something would drop on my head from the scaffolding as I pedalled under it. There was no-one around, so I manhandled the bike past the barrier stretched across the road and continued on my way.

I allowed myself a modest fist pump as I passed the 142 mile mark, my previous single ride distance record.

The weather conditions were pretty good all day – not too warm and mostly cloudy. I had to cope with bit of a headwind coming back but that seemed to die off after the first 30 miles. There was no rain.

I saw a beautiful sunset not long after I arrived back in Nottinghamshire, but after that darkness fell quite quickly and the temperature dropped. By the time I crossed the border back into Leicestershire at Zouch, it was properly dark. I had good lights on the bike but all the same I can’t say I enjoyed the last hour of the ride a great deal, making my way home in the cold and dark. I was also somewhat tired at this point and quite relieved to make it back.