So: our leader has promised to resign if she gets her awful deal through, and that – combined with the grim prospect that their fellow parliamentarians might succeed in their attempt to force the British people to stay in the EU against their expressed will – has persuaded the ERG, or most of them, to go along with it.

It’s now clear that the Conservatives’ allies in the Parliamentary DUP will vote against the deal again and that therefore, she’s more likely to fail. But either way – she’s toast.

I can well understand that many will be dismayed at the power a small parliamentary party is able to wield in the Commons, but that’s the way our representative democracy works.  The Lib Dems exploited it. The Greens, God forbid, would jump at the chance. Those are the breaks, folks.

There’s always the possibility of course that the People’s Remain Speaker of the House of Commons will enjoy his moment in the spotlight again, and refuse to allow the vote. He is something like a Premier League referee who thinks that the crowd have come to see him hand out penalties and red cards.  But – greatly to his own chagrin no doubt, that seems not to matter very much now.

As I type this, I’m waiting to hear the results of the “indicative motions” held today in proceedings hijacked by the contemptible Conservative hardline remainer Oliver Letwin and friends.  I have no doubt that what most of our parliamentary representatives will have voted for are the options that most closely resemble staying in the EU – utterly against the spirit of the referendum, and of our democracy itself.  One positive though is that the voting records will be published in Hansard, so these bastards will not be able to hide from their constituents what they are trying to do to them; namely colluding with foreign powers against their wishes and interests.

The PM is under no obligation to take heed of these recommendations of course, if indeed coherent recommendations do emerge. And our enemies at the EU have no power to negotiate our withdrawal with Oliver Letwin, or our parliament. Theresa is still the only game in town.

In fact, what I think many may not realise is that she still has it in her gift to leave the EU without a deal.  Not on Friday, but certainly next month or in May.  She has said that she won’t do that without Parliament’s approval, but of course she’s said a lot of things over the last few years that somehow didn’t turn out to correspond to real life.  There must be a small possibility that she was operating a little Project Fear of her own, to persuade the ERG to back her deal. 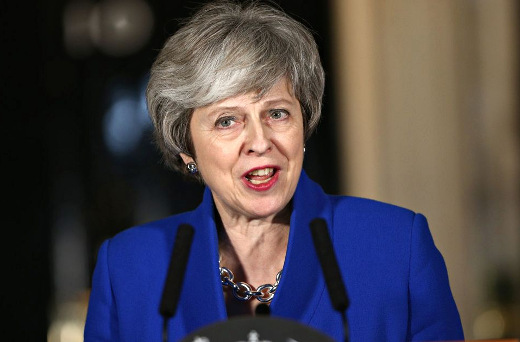 And she absolutely should take us straight out of the EU without a deal. It would be a defining, historic act of statesmanship in what has otherwise been a disappointing spell in office. It may well be the best or only way to ensure that the referendum result is respected. It would concentrate minds across the channel. And it would substantially improve our negotiating position with the EU for the various agreements on trade and cooperation that would surely follow, and follow quickly.

So I wonder if there’s a small chance that she will, in the end, do the right thing? Of course this would provoke torrential panty-wetting in the opposition parties who would have us believe that the sky will fall in in the event of a sharp, clean break with the EU – but you have to admit, Theresa can take it. She just keeps on walking into the bullets.

And right now, she doesn’t have an awful lot to lose.

I don’t know if she reads my blog – I expect not, but just in case you do, I’ve written a speech for you, Prime Minister. Change it around a bit if you like but keep the gist, please. Put your own spin on it to close it out.

It is a source of considerable disappointment to me that I have been unable to persuade Parliament to agree to the withdrawal agreement that I have negotiated over these last two years. However, I must tell you that I have decided that the United Kingdom will leave the European Union on <insert preferred date here> without a deal. The risk otherwise is that Brexit may never take place at all – and as Prime Minister, I simply cannot allow that to happen. I acknowledge that there may be difficult times in the coming months, but the government will do everything it can to prepare, and to mitigate the consequences.

I also understand that some will be surprised by this, but frankly, no-one should be – it was always my position that no deal is better than a bad deal, and that we would leave the EU with or without a deal – and in the Conservative manifesto for the General Election of 2017, I made an explicit commitment to this <keep a straight face here, please>.

This has been a difficult decision. There are no easy choices here. But let no-one misunderstand that the consequences of allowing Parliament to ride roughshod over the wishes of the electorate, freely expressed during the greatest democratic exercise in our country’s history, would be severe. As Prime Minister, the duty to prevent this rests with me. I simply cannot in good conscience abrogate that responsibility. I will not allow the public’s confidence in our politics to suffer the irreparable harm that would follow a defiance of the British people’s explicit instruction, clearly expressed during the referendum of 2016.

We can only hope.