One consequence of the relative low cost of computing equipment these days is that a lot of people of modest intellect are able to express themselves to a global public. While this isn’t always a good thing, it does allow a direct insight into the beliefs of people from other cultures who wouldn’t once have had a voice, some of them remarkable and confounding. I was confronted, not for the first time, by one such particular belief recently on Facebook.

As extraordinary as it may seem, some Americans look upon personal firearm ownership as a way of safeguarding their democracy. It is for them the freedom which guarantees their other freedoms, and when the time comes, they imagine themselves taking on and defeating their reasonably well-trained and very well-equipped armed forces with their handguns and hunting rifles, confident that their shotguns will stop a column of the US Army’s tanks dead in its tracks on the black day when they roll into their neighbourhood. 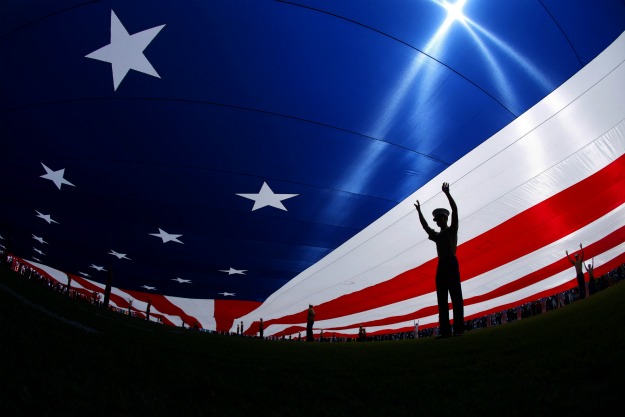 Not only this, but despite catastrophic gun death statistics in the United States, they view responsible gun controls in other countries as an infringement of personal liberties. It’s a similar mindset to that which sees government-provided health care described as one of the trappings of “tyranny”. You may have seen the activities of the “Tea Party” movement on the news in recent years. It represents a bafflingly incoherent but surprisingly persistent strand of opinion on the Western side of the Atlantic.

To be clear – not all Americans are deluded in this way. But what feeds this insane worldview is a central obsession of American political culture – the view of the United States of America as a uniquely free country; one that protects and nurtures the liberty of its people like no other.

The massive irony in all this that prompted me to write this piece, is that this vision of America as a beacon of freedom and democracy is actually a myth.

True, no other nation fixates on the concept of freedom so prominently in its national psyche. But without making so much fuss about it, the people of other countries – certainly including the United Kingdom and other Western European nations – actually enjoy substantially healthier democracy and greater individual freedom than do the citizens of the United States.

Perhaps some readers may be intrigued to learn that the Land of the Free is really the Land of the Less Free than Most Other Western Nations – though it is, broadly-speaking, a democracy to be clear, albeit a compromised one. It would be an exaggeration to pretend otherwise.

But as one who has worked there, I have to say that it is a surprisingly authoritarian society; policed by armed men and in mainstream society strikingly obedient. For example – would you believe that Americans who work abroad are compelled to pay income tax to the US exchequer? Or that it is illegal for them to bring back a cigar from Cuba, even for personal use? I cannot imagine for a moment either of these measures being tolerated by British people. There is a rather uncomfortable sense in which Americans are serfs rather than citizens, and just to underline that point, congressional sessions, local government meetings and even school days often start with the recital of a pledge of allegiance to their flag. It’s a strikingly militarist society too, where service in the armed forces is seen by some as a sort of civic duty.

The business of government in the United States is substantially less accountable than that to which we are accustomed here in the UK. There is no American equivalent of Prime Minister’s Questions, in which our head of government must face hostile questioning from his or her peers in the main legislative house each week. Nor does plurality of opinion flourish there; it is in fact the only industrialised nation without a significant Labour movement or socialist party. Even as a Conservative, I would find that troubling.

And of course in the United States, the head of government is also the head of state, unlike modern republics like Ireland and Germany which maintain a healthy distinction between the two roles.

Undoubtedly, the American political system allows for a populace that is unusually easily led, compared to other democracies. The famous mission to rid Saddam Hussein’s Iraq of its Weapons of Mass Destruction, overwhelmingly rejected by European public opinion ten years ago for the transparent sham that it was, met with broad acceptance from the American public at the same time. Naturally though there will always be dissent, and when students at Kent State University protested against their armed forces’ incursion into Cambodia in 1970, four of them were shot dead by the Ohio National Guard.

The United States incarcerates a higher proportion of its population than any other country in the world, and it maintains a death penalty. The right to life is respected in all circumstances in every other modern democratic nation.

Many Americans view their constitution, the same document that underpins their right of access to dangerous weapons, as being the ultimate guarantor of their liberty. That this is absolute nonsense is borne out by a casual examination of their history. Did you know for example that as recently as 1967, interracial marriage was illegal in some states? There has never been a law against interracial marriage in Britain, and as far as I’m aware the only Western European country that ever passed such a law into statute is Nazi Germany.

At around the same time, housing, medical care, education, employment, and public transport in the US was managed according to race. I ask British readers: can you imagine that being tolerated here in the 20th century? It is not something that has happened in this country since Anglo-Saxon times. But neither the United States Constitution nor its second amendment ever prevented “colored” Americans, in the parlance of the time, from being required to give up their seats on a bus to white people when necessary as a matter of policy. That particular policy, by the way, was one that was enforced by the threat of deadly force from bus drivers with firearms.

Yet despite all of this, some Americans subscribe to an idea known as “American exceptionalism”, in which the United States is imagined to be in a unique position to spread democracy and freedom throughout the world – ironically partly by virtue of the fact that their young nation represents a breaking away from the norms of a continent which in reality has in large measure come to protect and maintain the freedoms of its peoples more successfully than their own.

It is interesting to speculate how this self-congratulatory and ultimately false self-image arose within American culture. My own suspicion is that it has its roots in their War of Independence, and specifically the rhetoric employed in the propaganda used to rally the colonists to that cause. It must surely be sustained in the present by a general ignorance of life outside the United States.